‘When a fusion is needed, a transforaminal lumbar interbody fusion (TLIF ) is an option. This surgical procedure is performed through one incision in the middle of the back. It involves removing the pressure on the nerves in the back and it also stabilizes the spine by performing a fusion with screws and a small ‘spacer’ that is placed in the disc space. This is generally done if there is instability or scoliosis of the spine along with spinal stenosis. Dr. Murray performs a modification of the TLIF procedure called a ‘cortical trajectory TLIF’. This technique utilizes computer navigation to perform the surgery and to place the screws (or pins) that help hold the bones together through a very small incision with minimal tissue disruption. As a result, patients can sometimes leave the hospital after only one night in the hospital following the surgery. The option for a one night stay in the hospital is significantly lower than the average of three nights that are seen with a traditional TLIF surgery. Dr. Murray is actively involved in teaching the ‘cortical screw TLIF’ to other surgeons via educational courses throughout the country. 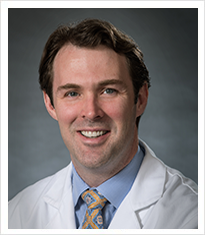